Amy Goldman is a gardener, author, artist, philanthropist, and well-known advocate for seed saving, plant breeding, and heirloom fruits and vegetables. Her mission is to celebrate and catalogue the magnificent diversity of standard, open-pollinated varieties, and to promote their conservation. Gregory Long, President Emeritus, describes her as “perhaps the world’s premier vegetable gardener.”

A Chapter in Heirloom Gardening

The more heirlooms Amy Goldman grew, the more devoted she became to their conservation, eventually writing five books about heirloom vegetables that celebrate their beauty, flavor, history, and diversity. Amy’s first three books, and her current release, The Melon, illustrated by award-winning photographer Victor Schrager with gorgeous images of Amy’s homegrown produce, were each awarded an American Horticultural Society Book of the Year award. Her first book, Melons for the Passionate Grower, was also nominated for the Garden Writers Association of America 2003 Garden Globe Award of Achievement, a James Beard Foundation Award, various Bookbinders Guild of New York awards for design and production, and the International Association of Culinary Professionals award for Best Design. Her second book, The Compleat Squash: A Passionate Grower’s Guide to Pumpkins, Squashes, and Gourds, won a bronze award of achievement from the Garden Writers Association of America.

Heirloom Harvest: Modern Daguerreotypes of Historic Garden Treasures was published by Bloomsbury in 2015. It features a personal essay by Goldman, photography by Jerry Spagnoli, and an afterword by M Mark. The book includes over 175 photographs of fruits, vegetables, nuts, herbs, and berries grown by Goldman on her 200-acre historic Hudson Valley farmstead. Heirloom Harvest was honored in 2016 by the British Book Awards as the best book in the Lifestyle Illustrated category.

The Melon was published by City Point Press in 2019. Produced by Goldman in collaboration with celebrated photographer Victor Schrager over the course of nine years, it’s a cut above their award-winning melon book, Melons for the Passionate Grower, published in 2002. In the intervening years, Goldman grew as a gardener and learned a lot more. In addition to the stunning portraits of 125 varieties and detailed descriptions, The Melon includes in-depth sections on picking and choosing melons and watermelons in the market, growing them in the garden, using them in cookery, and saving pure heirloom seeds.

The Garden Club of America has awarded the 2021 Florens DeBevoise Medal to Amy for her work in the heirloom seed and local food movements including horticultural achievement in the fields of hybridizing, collecting or nurturing. This is the highest honor bestowed upon individuals or institutions by the GCA for distinguished achievements in areas related to its purpose.

Heirloom fruits and vegetables have allowed Amy Goldman to take her place in a community of gardeners, seed savers, breeders, scholars, and seedsmen who care about heirlooms with tremendous zeal. Her “friends across the miles” live all over the world: France, Italy, England, Australia, and down-home America. Their camaraderie and generous sharing of knowledge and seeds have enriched her life, her gardens, and her books. Amy’s fellow members of the Seed Savers Exchange—the nation’s premier non-profit seed saving organization—have inspired her to put into words what can be learned from the past in hopes of creating a more bountiful future.

Amy is a former Vice Chairman of the Board of Directors of the New York Botanical Garden and a former Board Chairman of the Center for Jewish History. She serves as a trustee of the Lillian Goldman Charitable Trust and the Amy P. Goldman Foundation. Goldman served on the Board of Directors of Seed Savers Exchange for more than ten years, half of that time as Board Chair; she is now a Special Advisor.

Art of the Garden 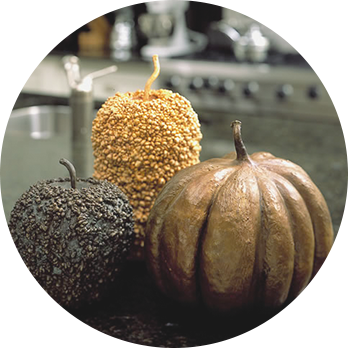 Inspired by nature and the harvest of heirloom treasures from her Hudson Valley gardens, Amy Goldman created a stunning line of limited-edition bronze sculptures. Aptly named “Rare Forms,” these works of art mirror the singular and timeless beauty of old-fashioned gourds, squash, melons, peppers, and tomatoes.